Our Club began as a passion project, driven by founder Norm Beckham. Norm owned the property and ran a Massey-Ferguson dealership through the 60's into the 80's. His interest in aviation led to construction of an 1800ft N-S runway adjacent the business, and the aquiring of a Cornell, CF-EIF, which quickly was grounded in 1961 due to wing rot. He then purchased a Piper PA-12, which quickly grew local interest. A Cessna 172 CF-JIM was traded for a tractor to Norm around this time. Alongside members Jack Wilford, Erwin Banhardt, and and Chuck Young the WOFC was in its early stages. After the crash landing of the PA-12 in 1968, the club was started with the goal to rebuild it, while CF-JIM was rented to the members. The clubhouse/Hangar was designed and built by Larry Rhame in 1969 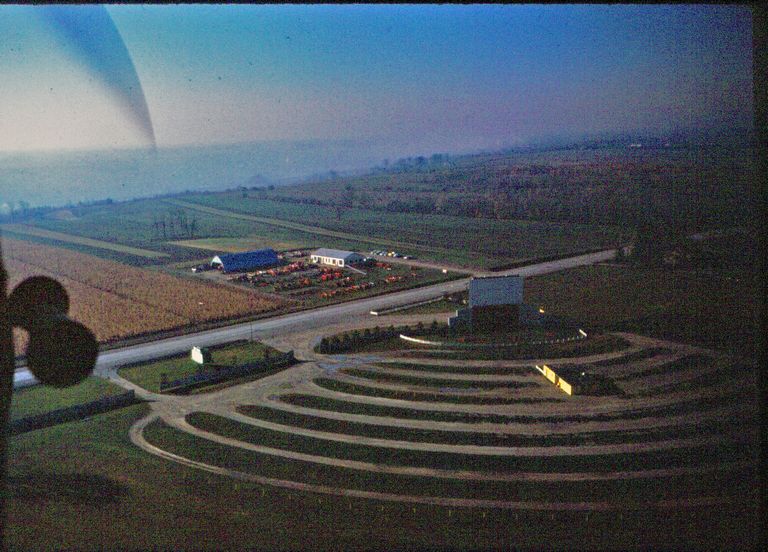 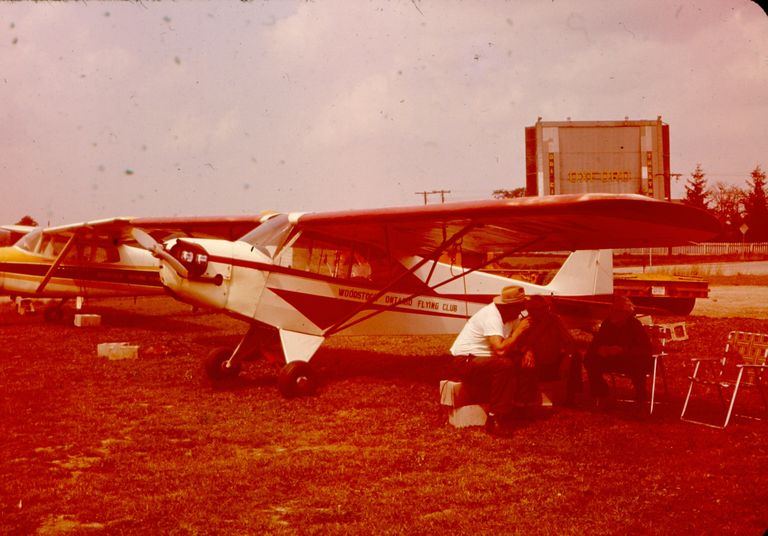 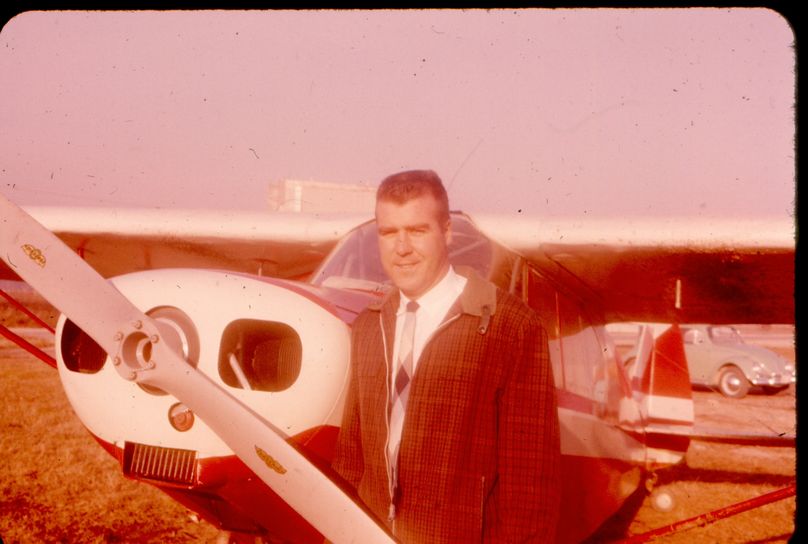 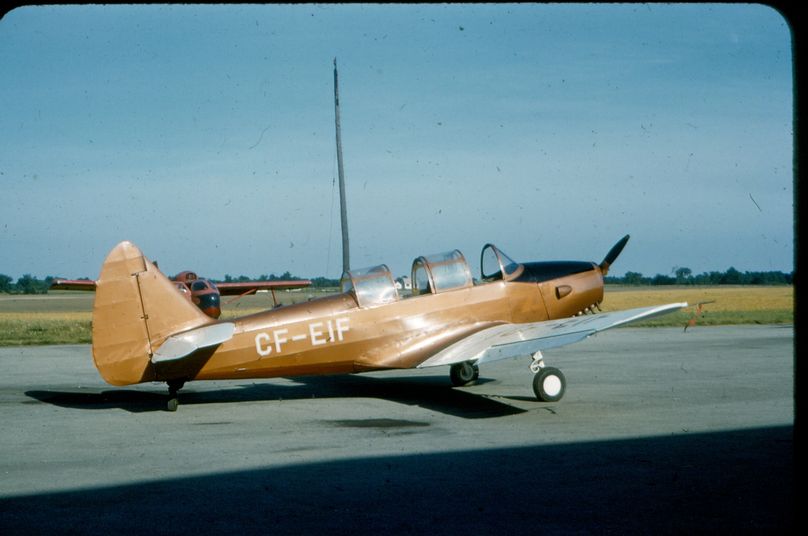 In the 1970's Jack Wilford started a flight school with Cessna 150 CF-YPI and Cessna Aerobat C-GBGM, operating alongside the Club. Glen Kitchen sold Lazair ultralight aircraft from the south hangar for some time. The club rotated through owning a number of aircraft through the 70's and 80s, including two PA-28s, two 172s, a J3 cub, and numerous 150s, The airstrip started as a 18/36 grass strip, with the club adding runway 09/27 around 1969 at the same time as the clubhouse was constructed. In the 1970's runway 09/27 was removed following aircraft-golf ball collisions. Runway 06/24(formally 05/23 with magnetic variation) at a length of 2200ft was constructed in 19___. The power lines at the end of 05 were buried to clear the approach with the help of John Restivo(Club member and Hydro One employee). The club's Cessna 172 CF-EFH was purchased in 1983. 1975 saw the construction of the private hangar adjacent the Club's hangar to house some of the Harvards and other aircraft. 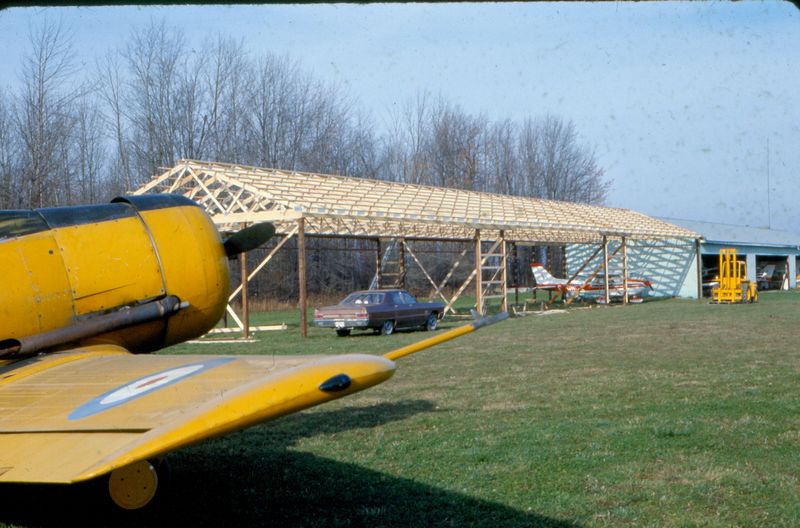 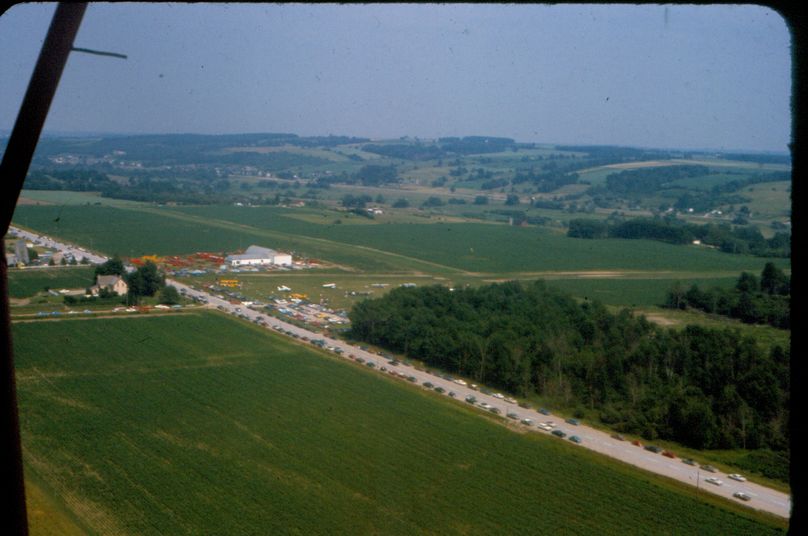 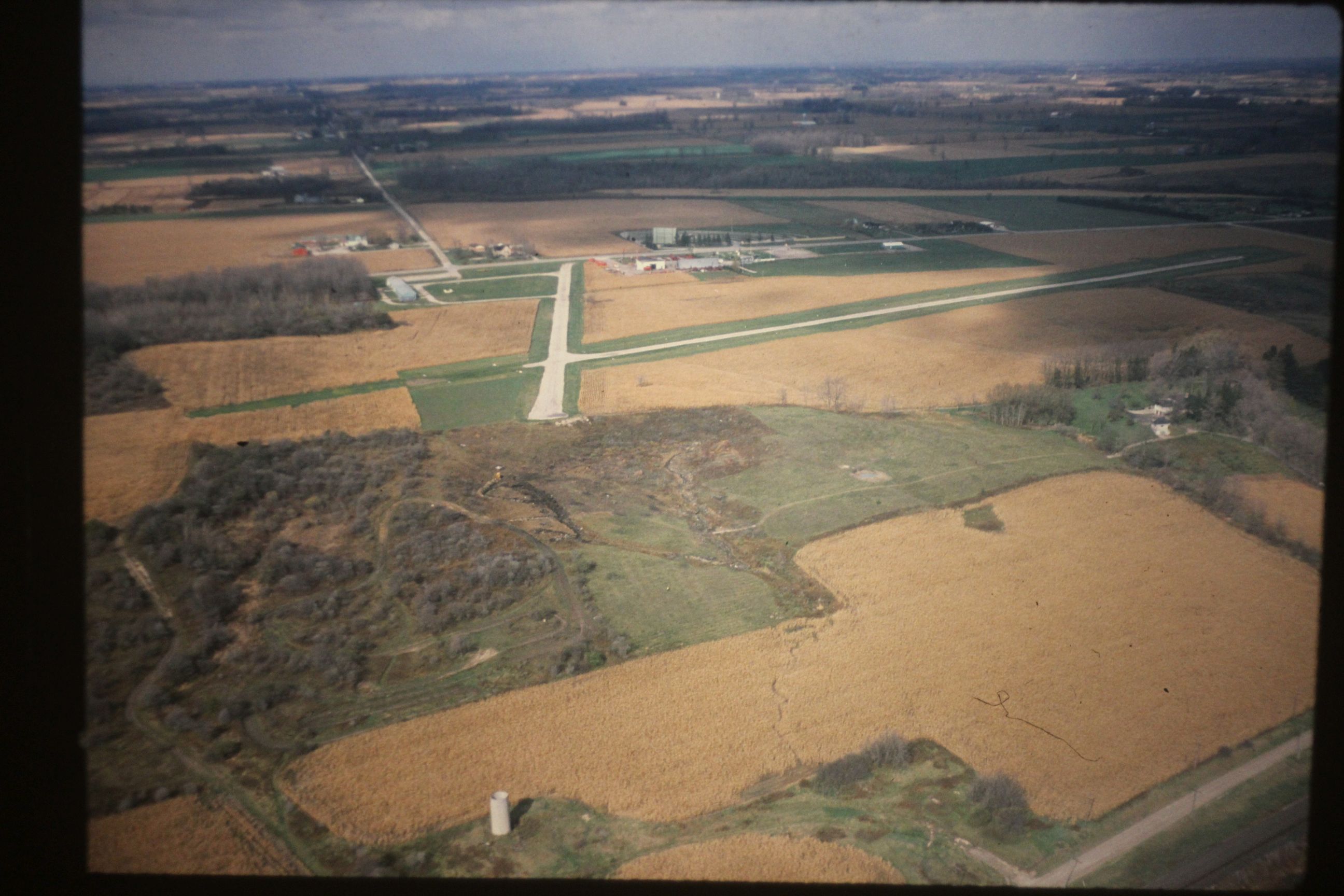 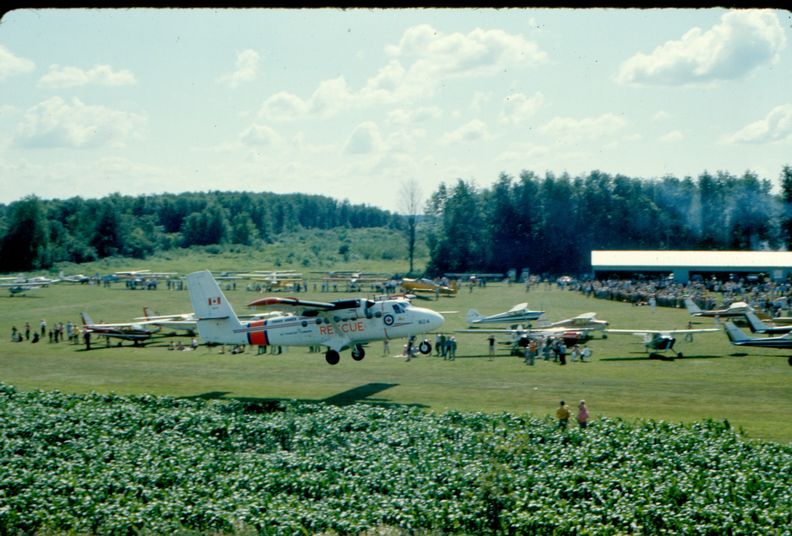 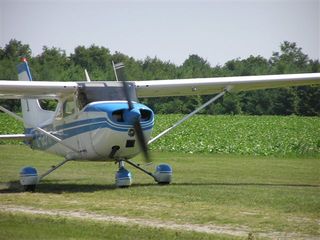 The first Woodstock Airshow was held around 1969, and established the annual July chicken dinner and airshow. The event ran for 24 years, though it rarely turned a profit. Regarded as "The Biggest Little Airshow on Grass", over 100 airplanes would attend at its peak, with the Harvards and other local airshow acts and pilots flying for food and sometimes fuel while the general public dined. Pyrotechnics were common, donated by Bob Hewitt and operated by his sons Robb, Dave and John and/or the local fire department. The last airshow was held in 1993. 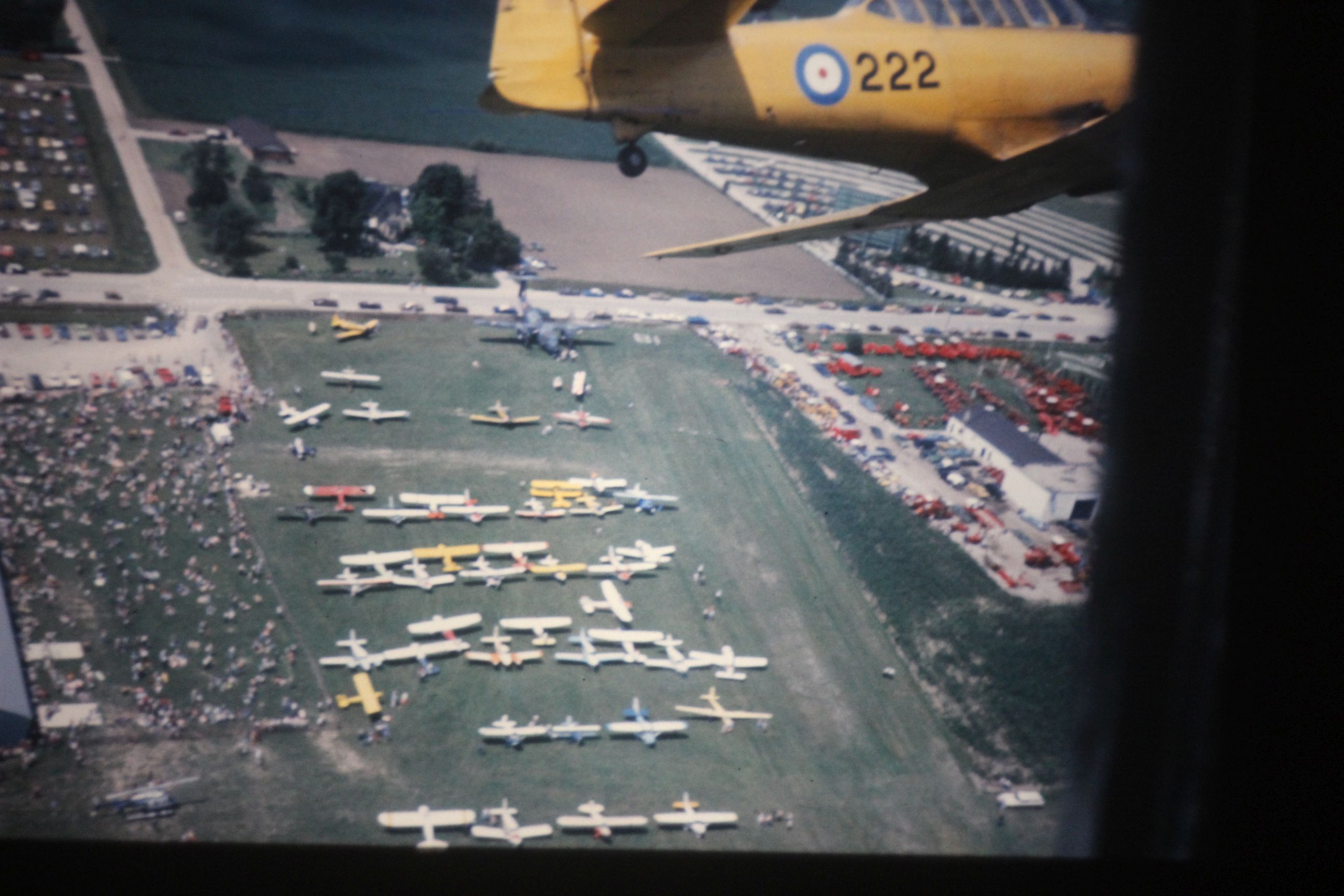 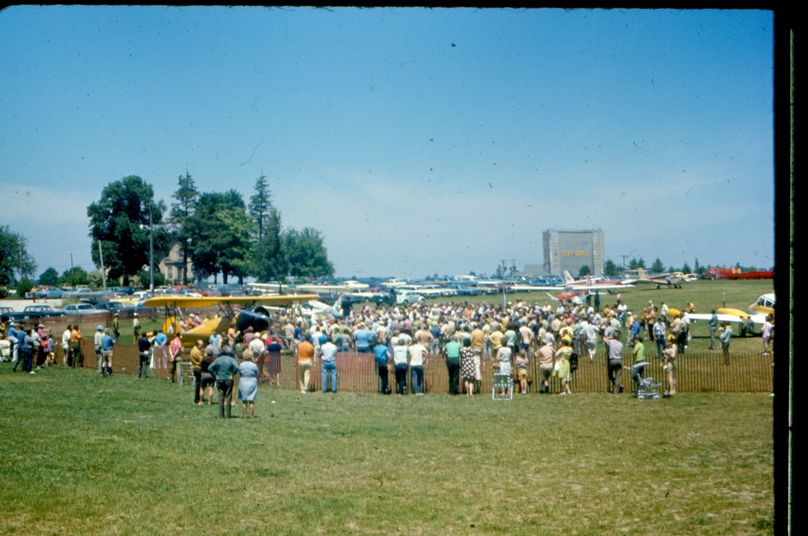 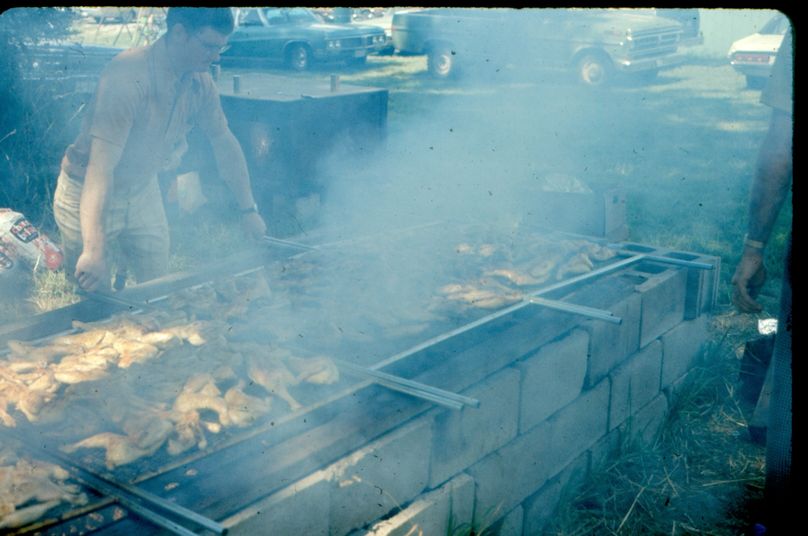 Following a downturn in profitability, the club's future began to come into question. As described in WOFC folk tales, Bob Hewitt used his superior leadership to guide the membership back on track. Paraphrased, he proclaimed during a general meeting "If we're not willing to put the work in, I motion to disband the club and liquidate!" which shocked and lit the fire in many of the members present. The Garage sale was one such idea to bring in more funds for the club. The hangars were emptied, and tables from overturned barrels and plywood were setup. Assorted 2nd, 3rd, and sometimes 4th hand items were collected over the year and laid out, and the public given the opportuinity to collect and barter for the items. The event was profitable and helped the club stay operational and costs for members low. The annual Garage Sale was phased out in 2019 to shift focus to our roots, aviation social events. 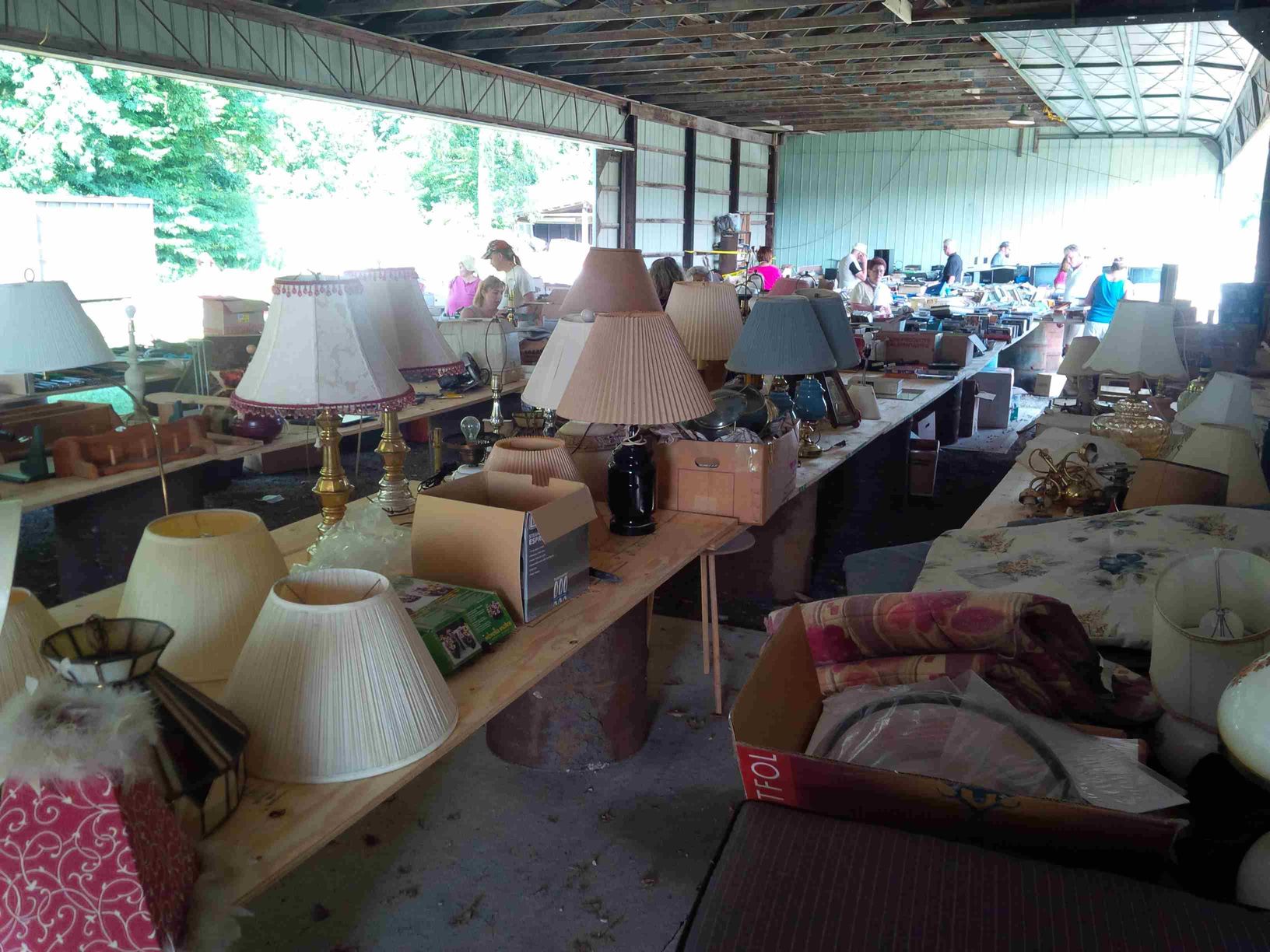 Founding fathers Norm Beckham and Bob Hewitt along other club members and harvard enthusiasts such as Leonard Fallowfield, ___, and _____ purchased their first harvard "CF-MKA" in 1969 from a chicken farm. CF-MTX was purchased in 1975, CF-WPK and CF-NDB shortly there after. These harvards were operated privately, and flown for local events. The 4 ship formation team became a staple at local shows with solo aerobatics from Norm "Mr. Harvard" Beckham. With the purchase of the fifth harvard CF-HWX around 1985, the Canadian Harvard Aircraft Association was founded. Two harvards were kept privately by Bob Hewitt, Norm Beckham and partners, MKA and NDB.
The two Beckhams, Norm and Kent began flying formation and solo-opposing aerobatics in the harvards in 19___. Following health problems Norm stepped away from flying in 1998. Dave Hewitt, and CHAA member Pete Spence began training with Kent to form the Canadian Harvard Aerobatic Team, at the time a subsidiary of CHAA. The team debuted in 2000 at the London Airshow. Nearing 2012 the team privatized, heading in their own direction. They operated for 20 years, adding a fourth pilot Marco Rusconi in 2014, incorporating 3 additional crew members, and officially disbanding in 2020. 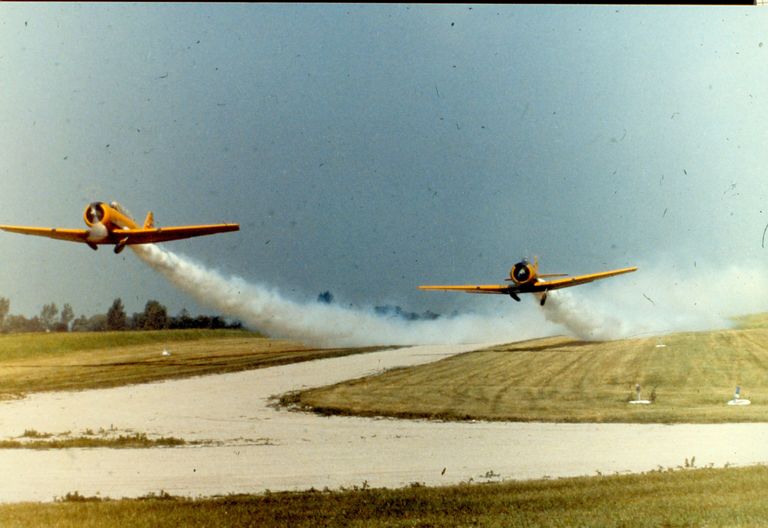 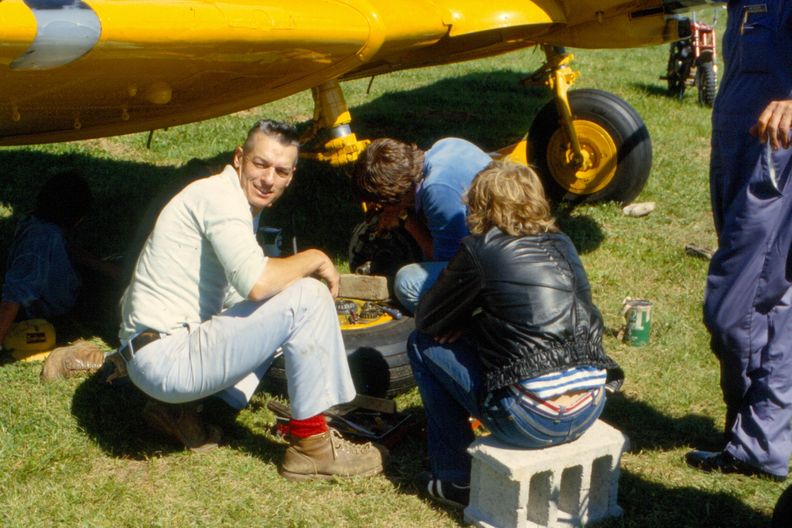 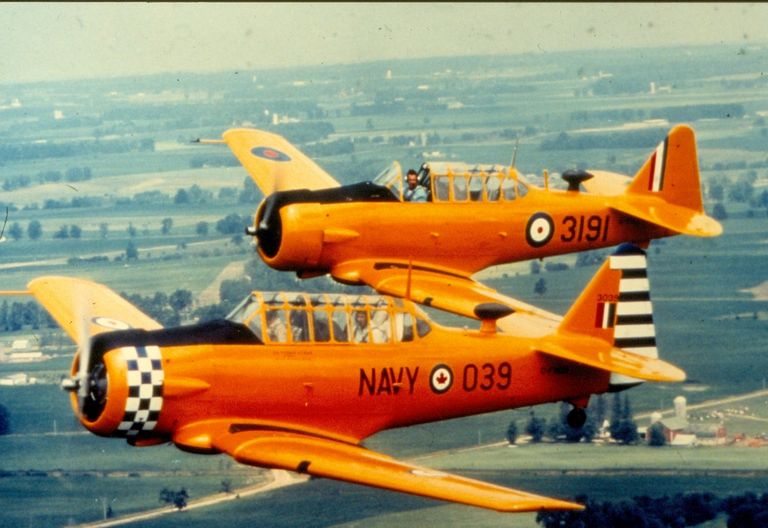 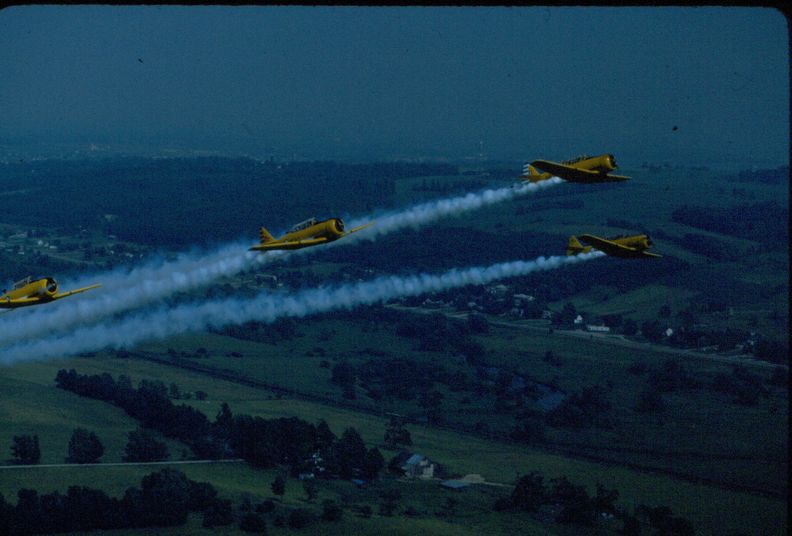 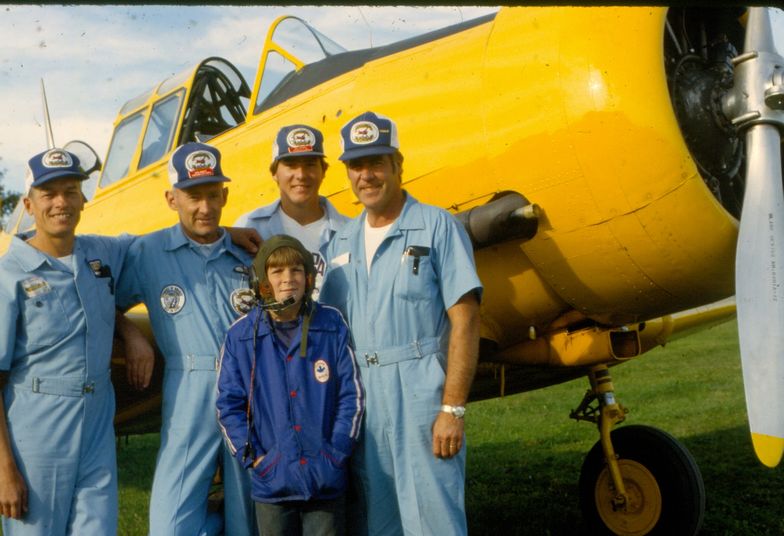 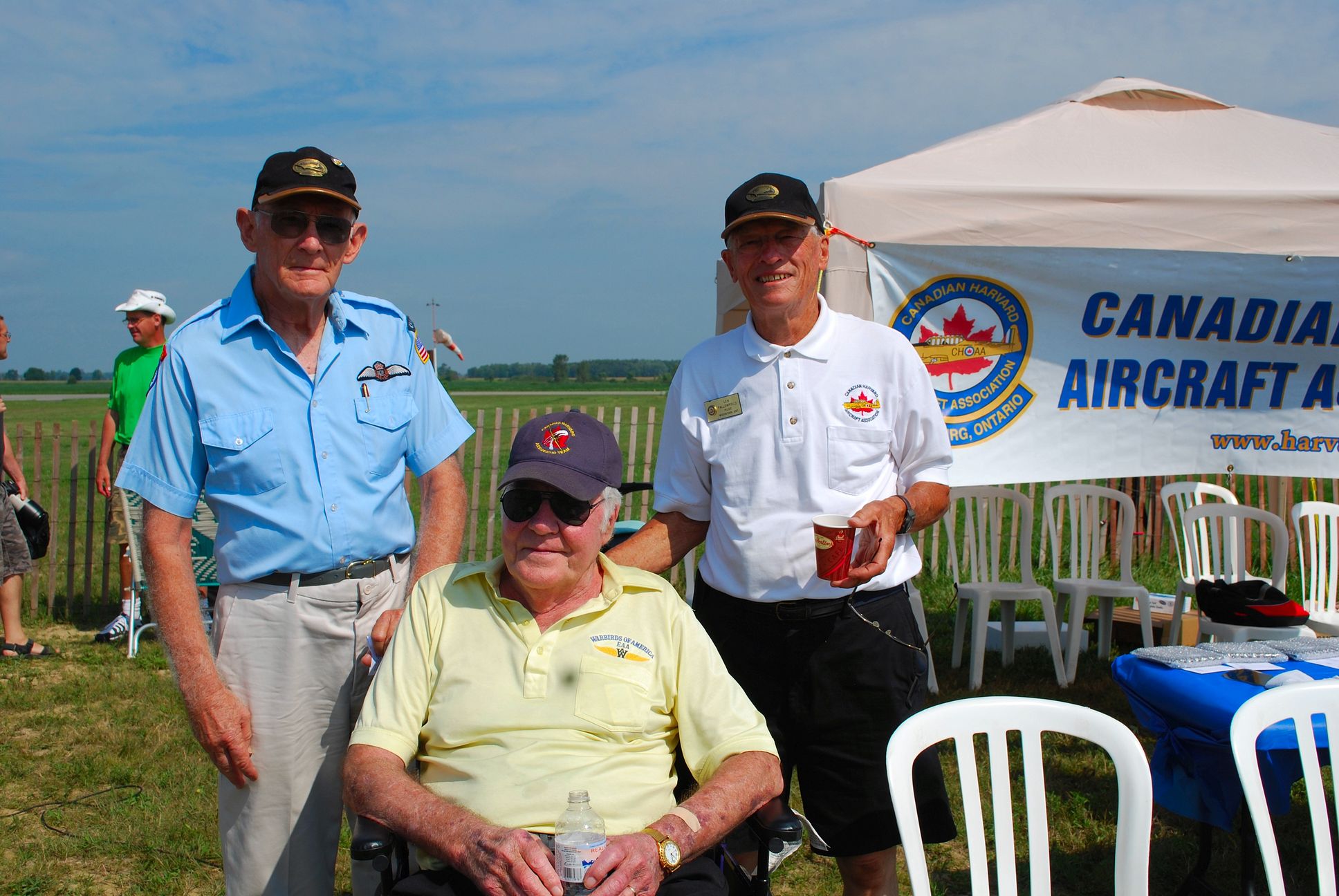 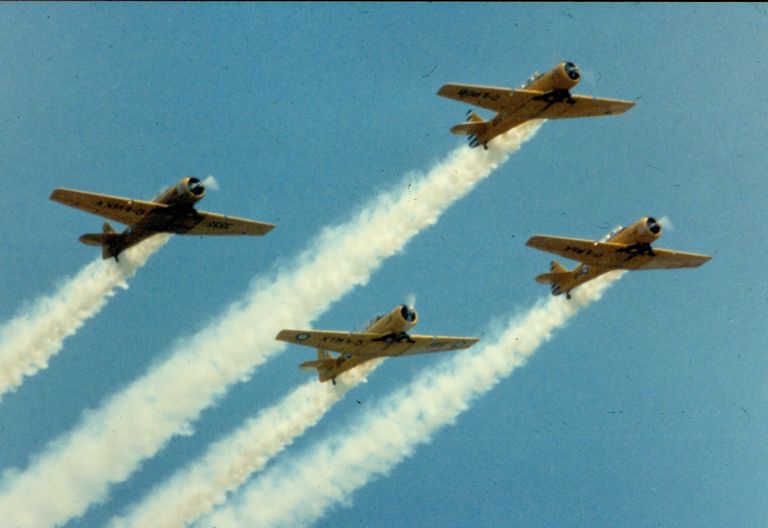 Turn of the Century

06/24 was shortened to 1800ft in the mid 1970's, extended to 2400ft, then shortened again to 1800ft in the mid 80's as land owners and liability concerns changed. The eastern half of the airport was taken over by Kent Beckham in 2001. Runway 18/36 was removed in 2002 due to safety concerns with poor over runs and the occurence of aircraft accidents. With the purchase of land on the west side of the airport by the Hewitt Family in 2002, 06/24 was extended to the current length of 3200ft. The club purchased Piper J3 CF-RJS from club member Wayne Harris in 20__ bringing the total aircraft up to two. 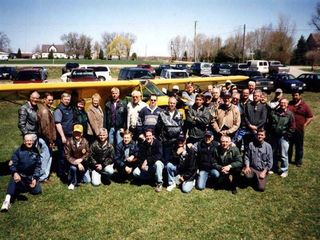 Today the club features over 70 members, 44 which are active flying members. The club continues to own and operate Cessna 172 EFH, and Piper J3 Cub SBM. In 2019 the airport was dedicated by land owner Marco Rusconi to Bob Hewitt and Norm Beckham, and formally renamed "Norm Beckham/Bob Hewitt Field". In 2021 the Club leased a Bellanca Citabria 7KCAB from the Hewitt family to further Club member experience with aerobatics and higher performance aircraft. In 2022 the Clubhouse was renovated, spearheaded by Tim Stackhouse to bring the dated interior to modern spec. 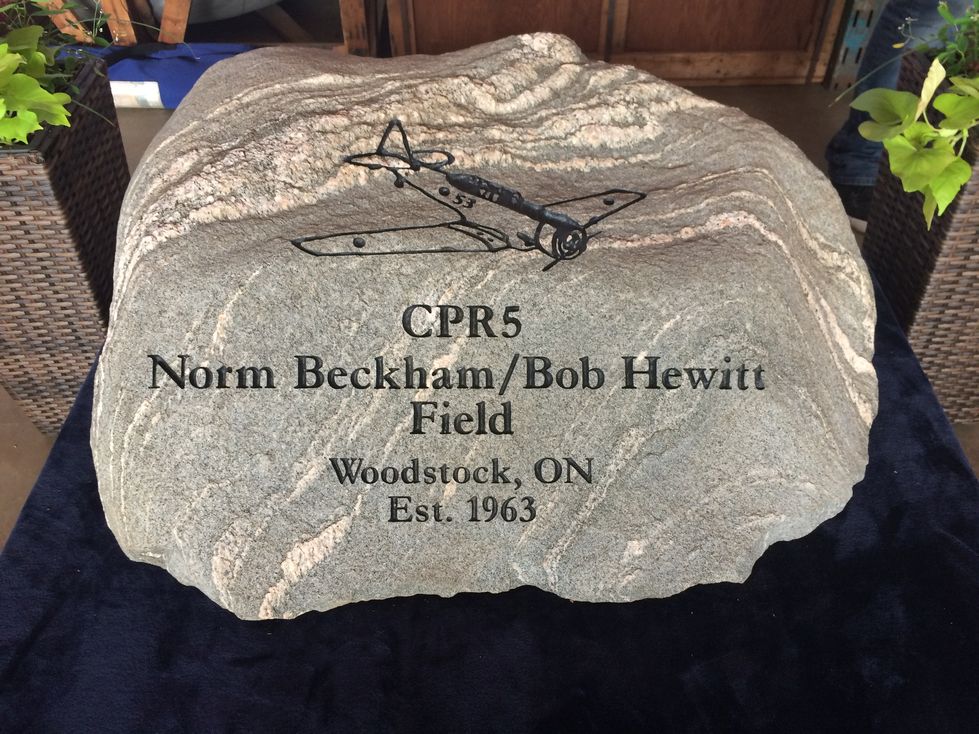 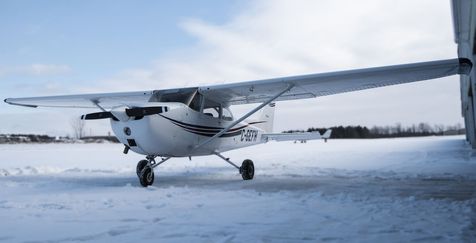 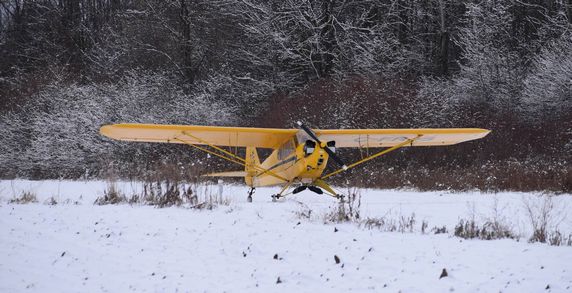 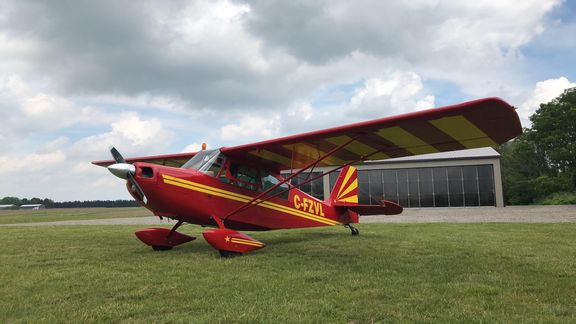 Looking to the Future

The Membership continues to grow with initiatives to bring in the next generation of aviators in full swing. Engagement following the COVID 19 Pandemic has sharply risen, and new experiences, opportunities, and friendships continue to develop. 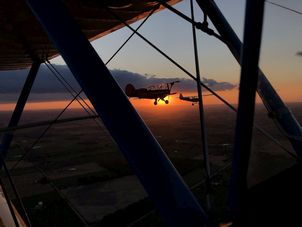